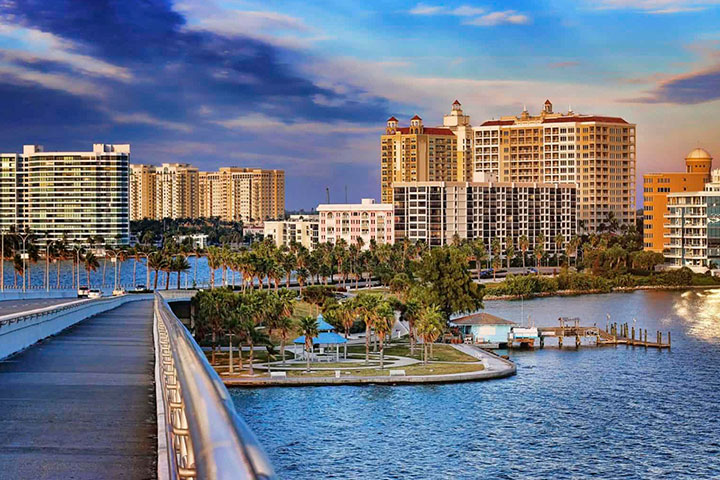 Southwest Florida is seeing unprecedented growth. More and more people are moving full-time to the area, and they aren’t just retirees either. Sarasota County is the hottest area this year so far. So, what does that growth look like and how can business owners ride the wave?

From Sarasota County’s northern border with Manatee to Charlotte County on its southern edge, signs of growth are everywhere. Start with downtown Sarasota, the county’s professional and cultural heart. New condos, apartment buildings, high-rise hotels, shops and offices are up or in progress all around downtown. The city of roughly 57,000 residents has seen 4,000 new housing units in the past three years. Sarasota is experiencing what City Manager Tom Barwin says is, “probably the biggest growth spurt in the city’s history.”

North Port Is Even Bigger

Sarasota isn’t even the largest city in the county any more. In the county’s southern tier, North Port, with more affordable housing and a younger population (median age of 44), is now home to about 66,000 residents. Ruth Buchanan, North Port economic development manager, calls it, “the workforce engine for the metro area.” The influx of new residents is dominated by wealthy Baby Boomer retirees, but includes young families and entrepreneurial millennials. Overall, the county’s population has grown by 16% since 2010.

Fueling all the growth is the area’s wealth, a healthy economy and a high quality of life. The county’s barrier island beaches rank among the finest in the world. Sarasota’s arts and cultural scene tops that of many cities three times its size. It has top-rated hospitals, and its public schools rank among the state’s best. It’s home to a campus of Florida State University’s medical school, the highly regarded Ringling College of Art and Design and New College, the honors college of the State University System.

Furthermore, since March, Sarasota has remained the nation's fastest-growing luxury market, with sales prices up 21 percent since last June. Half of all luxury homes in Sarasota sold within 165 days – 22 percent faster than the previous year. The #2 area on the list has only seen sales prices up by 15%, so Sarasota is far ahead of the rest of the country.

WalletHub ranked Sarasota the Number 1 Florida city for jobs in 2018.

With growth comes the demand for services, restaurants, housing, retail shopping and jobs. For business owners, population growth means a steady flow of new customers to the area. It also gives more opportunities for new businesses to open, in order to serve all of these customers who have recently relocated. Also, as construction continues to boom, new businesses will be required to serve those areas that are newly developed. Additionally, the development of these areas serves as an opportunity for existing businesses to expand. For current business owners thinking of selling their business, now might be the time, with so many families and young entrepreneurs moving to the area.

Business owners who leverage this population growth to their advantage certainly stand to expand along with it. Capturing new customers as they move to the area is key. These new customers don’t have relationships with existing businesses and they aren’t tied into contracts either. Therefore, targeting any marketing to potential customers who have recently moved to the area is a smart move in these growing regions.

Now is the perfect time for business owners to capitalize on this growth and maximize the opportunity.

Please log in again. The login page will open in a new tab. After logging in you can close it and return to this page.